Before assessments can collect reliable data, learning goals should be articulated for all lessons based on the Minnesota Academic Standards. Once the lesson-sized learning goals have been defined, part of implementing them effectively with students involves also defining success criteria. Success criteria must be developed so all students understand what mastery of the learning goal looks like. Success criteria is therefore observable behaviors and skills which demonstrate progress toward the learning goals.
The Minnesota Department of Education in collaboration with Minnesota educators, have developed Achievement Level Descriptors, which outline the knowledge, skills, and abilities for each subject and grade level of the standards at four different achievement levels.
Understanding Achievement Level Descriptors 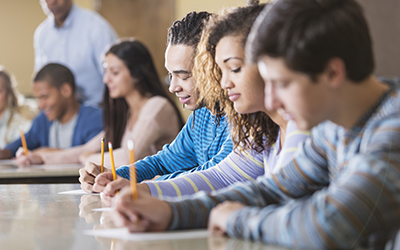 The Achievement Level Descriptors (ALDs) describe the four levels of achievement specific to grade-level for the Minnesota assessments, based on the standards. Students who achieve the “Meets” and “Exceeds” levels are considered proficient with regard to the knowledge, skills and abilities described in the academic standards.
Developed by panels of Minnesota teachers and content experts, the ALDs were created by focusing on a set of questions in reference to the standards and test specifications. These questions might also be useful to educators in determining performance levels when designing classroom assessments and learning objectives:
ALDs from the Individual Student Reports for reading, mathematics, science and English learner assessments are provided here:
Caution when using ALDs: The level of granularity of standards and benchmarks determines the extent to which they can be described across a continuum of performance levels. It is possible to distinguish four levels of performance in many benchmarks, but in others it is not. For this reason, the KSAs of some benchmarks may only appear at the “Meets” level, and not “exceeds.”
For further information, please read Understanding Achievement Level Descriptors.

Achievement Level Descriptor Maps are supplementary materials to be used in conjunction with the MCA ALDs. The ALD maps align the descriptors horizontally by strands (Mathematics and Science) or standards (Reading) and are helpful for comparing performance across proficiency levels. The ALD maps can be useful in articulating learning goals and developing more specific success criteria for classroom assessment aligned to the standards.